Recently, the Tufts University’s Center for the Study of Drug Development (CSDD) released an interesting report revealing the dramatic shift of pharmaceutical companies from manufacturing small molecule drugs to a large number of biotechnology drugs. The report shows that in 2001, the biotech products worldwide accounted for only 7% of the revenue obtained from selling top 10 biopharma products which, in 2012 increased to a remarkable 71% of the revenue obtained. It was further mentioned by Dr. Kenneth Kaitin, Director of Tufts CSDD that the remarkable transformation of Big Pharma is the result of both expiry of the patents on high profit-making small molecule drugs and advent of new technologies which have made it possible to develop newer products providing improved disease control.

That there is a tremendous shift of pharma companies towards the development of biotech drugs is quite evident from the fact that in 1989, there were only 13 commercially available biotech drugs but their number increased to a remarkable 210 in 2012. Around the world, the sale of biotech drugs has increased by a marked 353% such that in 2001, their sale led to overall earnings of only $36 billion but the earnings have increased to $163 billion in the year 2012. 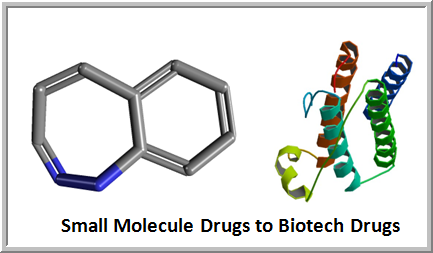 Another evidence provided in support of the claim by the Tufts CSDD report is that in 2001, 355 biotech drugs were under clinical trials but in 2012, their number increased by 155% to a huge number that is, 907. The report further mentions that in 2012, a total of 429 biotech drugs belonging to 21 pharmaceutical companies were in the process of clinical development out of which 58% were the monoclonal antibodies.

The money involved in the development of biotech drugs has increased from $10.5 billion in 2001 to $103 billion in 2012. In the end, the report makes a comparison of the acquisitions of the biotech companies by Big Pharma and reveals that the number of biotech companies acquired by Big Pharma has increased five times that is from 15 in the time period between 1998 and 2002 to 75 in the time period between 2008 and 2012.

So, the report concludes that the notion which was held earlier about large pharmaceutical companies that their main focus is on development of small molecule drugs is not completely relevant today.