Charging a smartphone with solar energy isn’t a new idea but Apple has planned to take a step ahead in building solar charging proficiency directly into the iPhone. U.S Patent and Trademark Office have approved Apple’s patent, US8368654B2

• This patent is about integrating touch sensor and solar assembly. 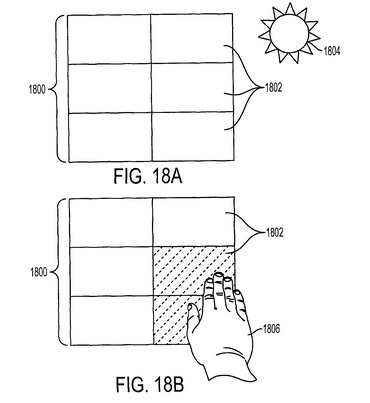 • This is an innovative device, which will be used in further iPhones and media players.

• This device allows portable devices to be both compact and power-efficient.

• By being fully integrated, the touch sensor and solar are allowing portable devices to remain compact.

According to Mikey Campbell at Applelnsider “The technology is arguably most useful in these types of products as consumer demand for larger, power-hungry screens is pushing the limit of battery design.” Bigger and brighter screens generally have battery problem and this device would overcome this problem. Solar cells are completely integrated in the touch screen’s array that would utilize electrodes which would serve the twin purposes i.e. harvests energy as well as serves as an optical sensor. Apple’s patent application says the technology could be utilised in handheld devices like “a media player or phone” but this application also incorporates an image of a screen that matches in size. Apple has filed application for solar-related patents in previous years also but due to high production cost, these technologies have been slow to take off. These are written below:

2) In August 2008, patent application related to electronics circuitry needed to utilize a solar cell comprehends into a small device.

3) Patent filed in September 2008, to embed solar cells under the touch screens of handheld devices.