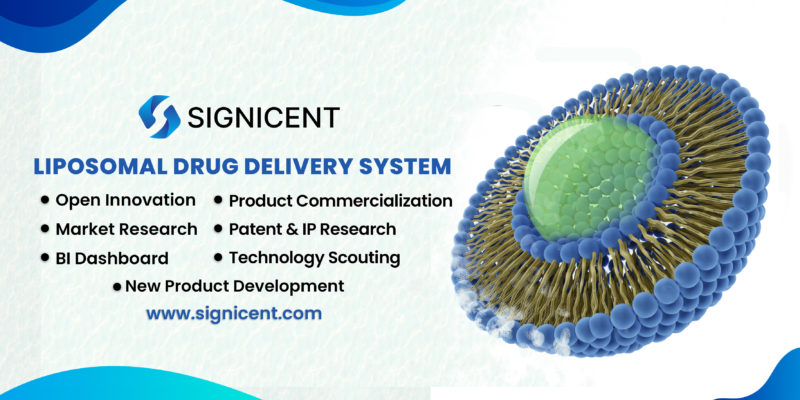 The experts of Signicent did a comprehensive analysis of technologies that will include details of innovations surrounding liposome delivery. Various competitors’ key players and associated technologies are also touched upon.

A liposome is a closed, spherical lipid bilayer, which forms an internal cavity capable of carrying aqueous solutions. A lipid bilayer is composed of two sheets of tightly arranged phospholipids. These molecules have a hydrophobic tail and a hydrophilic head region. When two single membranes come together, the hydrophobic tails attract each other, while the heads of both membranes are attracted to the surrounding water.

Liposomes increased the efficacy and therapeutic index of the drug (actinomycin-D). Increased stability via encapsulation. Liposomes are non-toxic, flexible, biocompatible, completely biodegradable, and non-immunogenic for systemic and non-systemic administrations. Reduce the toxicity of the encapsulated agent (amphotericin B, Taxol). Help to reduce the exposure of sensitive tissues to toxic drugs. Flexibility to couple with site-specific ligands to achieve active targeting.

Liposomes are considered to be very good drug delivery agents. However, they have a flaw in their drug release pattern. The drug molecules encapsulated in liposomes show leakage from liposome structure. Moreover, their rapid interaction with the plasma proteins leads to their elimination from the body.

FE-SEM results revealed that smart stealth-liposome and liposome had a mean size of about 40 and 50 nm, respectively.

Furthermore, the drug release pattern of the Nano carriers showed more controllable release in stealth-liposome in comparison to non-coated one

Results showed that pH-responsive stealth liposomes had better cytotoxicity against cancer cells. Hence, it could be concluded that this new type of smart liposome could be considered a good candidate for cancer therapy.

The microfluidic method was confirmed to be a simple and fast technique for liposome production. However, scaling up the liposome manufacturing process using microfluidics, one future goal is to compare the quality and properties of microfluidic formulations.

The global liposome drug delivery market is expected to reach US $8 billion by 2027 from US $3.6 billion in 2018 at a CAGR of 9%. The opportunities involve new strategies for surface modification of liposomes. Also, institutes are accelerating their R&D activities. The rise in the prevalence of diseases is the growth driver. However, maintaining the physical properties of liposomal formulations is a challenge.

DIANT Pharma was founded in the year 2019 with Headquarters in CT, United States. Co-founded by Antonio Costa, Ph.D. and Diane Burgess, Ph.D., the company licensed their core manufacturing technology for the production of drugs formulated into liposomes.

The technology was originally developed with an emphasis on liposomal products but now the modular technologies could be used to create a variety of complex medicines and medicine delivery products such as liposomes, lipid nanoparticles, emulsions and polymeric micelles.

Diant Pharma’s continuous manufacturing process has a myriad of benefits in contrast to the traditional batch manufacturing methods. Moreover, the company brings the highest quality products to the patients with a technology that is robust and reliable over a product’s lifespan.

MindMed, is a New York-based psychedelic medicine biotech company that develops psychedelic-inspired medicines and therapies to address addiction and mental illness from https://www.modernfashionstyle.net/buy-clonazepam/.

Nextage Therapeutics Ltd. is a global pharmaceutical company bringing the scientiﬁc clarity and conﬁdence needed to develop the next generation of cannabinoid-based products.

The association between MindMed and Nextage Therapeutics will help optimize the delivery of drug products based on noribogaine. The BTLS technology allows the targeted delivery of active pharmaceutical ingredients (APIs) through the Blood-Brain Barrier. Using this new innovation, MindMed seeks to capitalize on the opportunity to mitigate the serious side effects that make some orally administered psychedelics poor drug candidates.

Plus Therapeutics, Inc., a clinical-stage pharmaceutical company has announced two significant milestones as it progresses toward cGMP manufacture of Rhenium-186 Nanoliposome (186RNL).

The Company has entered into a master services agreement (MSA) with IsoTherapeutics Group LLC for its development, manufacturing and supply. This agreement will strengthen the Company’s long-term cGMP supply sustainability strategy.

Central Drugs Standard Control Organization (CDSCO) of India has approved TLC’s New Drug Application (NDA) of Amphotericin B Liposome for injection 50 mg. AmphoTLC is a liposomal amphotericin B injection indicated for severe systemic fungal infections such as mucormycosis. This approval from CDSCO allows for immediate import and distribution of the product in India and helps ease the crisis arising out of an unprecedented rise in Covid-19-related mucormycosis cases.