Mono-crystalline solar cells are formed from single-crystal silicon. Because the cell is composed of a single crystal, the electrons that generate a flow of electricity have more room to move. As a result, mono-crystalline panels are more efficient than their polycrystalline counterparts.

The mono-crystalline solar cell (Mono-Si) market is expected to witness market growth at a rate of 5.70% in the forecast period of 2020 to 2027.

Increasing demand for solar panels on the residential rooftop. Rising environmental concern leads to the adaption of solar energy across the world. Increasing government incentives and reduction in taxes for solar energy. Decreasing the cost of PV and energy storage systems.

This section of the solar panel report sheds light on the start-ups.

EcoSolifer is a vertically integrated Swiss Company involved in PV power generation. Their heterojunction technology delivers solar cells with higher levels of energy efficiency while having fewer steps in the production process.

This section of the solar panel report sheds light on the key players.

Founded in 2001, Suntech has supplied over 22GW photovoltaic modules to more than 100 countries. Its employ turnover is around 17,000 and annual turnover is over $5.2 BILLION. It has its HQ in Wuxi, China

Founded in 2005, JA Solar is a manufacturer of high-performance photovoltaic products. With 12 manufacturing bases and more than 20 branches around the world the company has an employee turnover of around 22000 and has annual sales revenue of around $200 MILLION. Its HQ is in Beijing, China

SunPower Corporation is an American energy company that designs and manufactures crystalline silicon photovoltaic cells and solar panels. Employ turnover of 8400 and an annual sales turnover of over $1.8 BILLION.  It has HQ in San Jose, California, United States.

JinkoSolar (NYSE: JKS) is one of the largest and most innovative solar module manufacturers in the world. Its employ turnover is around 15,195 and its annual turnover is over $4.23 BILLION. It has its HQ in Shanghai, China

Gintech, NSP and Solartech to merge

This section of the solar panel report sheds light on the recent developments that have happened in solar panels.

In July 2020, JinkoSolar (China) achieved a solar conversion efficiency of 24.79% for large-area N-type mono-crystalline silicon solar cells. The record-breaking mono-crystalline silicon solar cell was fabricated on a high-quality CZ mono-Si substrate, with a practical size of 267.72cm2, and several advanced technologies have been implemented to achieve this new record of 24.79%, including passivating contact technologies, advanced diffusion system, surface passivation, and advanced anti-reflection technologies, and a series of the material upgrade were integrated into the cell process.

In June 2020, a group of scientists from Saudi Arabia’s King Abdullah University of Science and Technology (KAUST), the University of Jeddah, and the University of California, Berkeley, have demonstrated an interdigitated back contacts (IBC) spherical solar cell with stronger heat-dissipation and reduced dust accumulation compared to conventional flat solar cells achieving a reported efficiency rate of 18.93%. Through a corrugation technique, the research group was able to develop a cell with 138 μm-wide grooves. This made it possible to achieve a flexible structure with a total area loss of only 5.6%.

In February 2020, researchers in St. Petersburg (Russia) created a tiny prototype of a high-efficiency solar cell using gallium phosphide and nitrogen.  They began with a silicon substrate, or wafer, which is a thin slice of crystalline silicon. On top of that, they grew a layer of pale orange gallium phosphide. When combined with nitrogen, the compound demonstrated a direct bandgap and was “great” at absorbing light, they said. The cell’s single photoactive layer showed a solar efficiency of 2 percent. 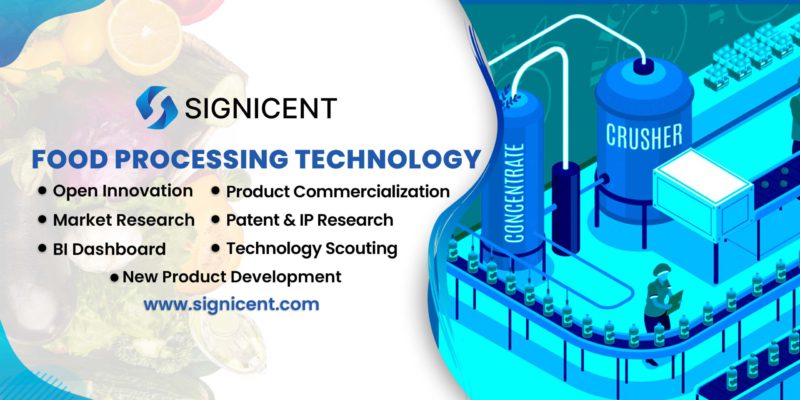 The objective of the food processing technology report is to shed light on...

Microelectronics Report: How Chip Bonding technologies are evolving in the market?

Microelectronics bonding is the semiconductor fabrication by making electrical interconnections with silicon chips...