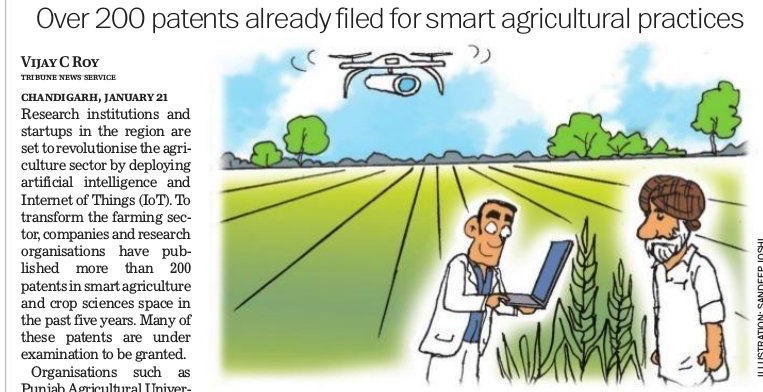 Technology is the fuel to drive the engine of progress in the 21st century where advancement and development are an eternal and indispensable ritual for the economic evolution. Over the last decade, India has emerged as an attractive economic zone and has lured domestic as well as foreign investments, especially the Northern region of the country. Punjab, Haryana and Himachal, which are nationally enticed for their accelerating agricultural economy, have earned a very eminent position.

Punjab contributes to approximately 20% of India’s food production and is a major cultivator of rice, cotton, dairy, fruits, vegetables and meat. Haryana is the second largest contributor of wheat and third largest producer of rice. Himachal Pradesh that stays the largest producer of Apples in India is also gaining strength in horticulture. However, the majority of the cultivation and harvesting practices are traditional, production fields are small, management of harvests is improper, production is unplanned, and such issues fail to satisfy the ever increasing demands of the ever increasing population. The fragility of the infrastructure, laggard techniques, and the uncontrolled adulteration of food crops, have hampered the well-being of the nation, especially Punjab, Haryana and Himachal which are the prominent states to give athletes, thereby demanding a full-fledged system to improvise and upscale the current food cultivation practices.

The new frontiers of the technology and innovations are here to fill the voids of the current agricultural ecosystem which include the advanced machinery and smart technologies from various companies and universities in the region of Punjab, Haryana and Himachal few of which have already been deployed to deliver the effective solutions. Research organizations such as Punjab Agricultural University, National Agri-Food Biotechnology Institute (NABI), Centre of Innovative and Applied Bioprocessing (CIAB), Chitkara University and Chandigarh group of Colleges, hold Intellectual Property Rights (IPR) over a diverse range of latest technology. The companies like Agnext Technologies, Pindfresh, Osaw Industrial Products, Fare Labs Pvt Ltd are also involved in new age farming technology.

Research conducted by Signicent LLP suggests that companies and research organizations are actively working in this region and have filled for more than 200 patents in smart agriculture and crop sciences space, many of which are under examination to be granted. Panjab Agricultural University has recently filed patent over the technology to reduce moisture over grains and bacteriological food testing kits. Technologies like these will help coping up with the post-harvest losses and storage issues. Chitkara University has developed and filed a patent for the real time monitoring of crops. Chandigarh University and Chandigarh Group of College are also in the race of protecting and delivering such technologies.

Agri-based technologies are not only confined to the domain of farming, but have also turned ‘Smart’ with the constructive incorporation of computer software technologies and Artificial Intelligence (AI). This is to build unmanned system for agriculture practices which are more efficient. AI and Big Data related technologies are being looked to be the game-changers in Indian Agriculture Industry. Crop Selection is a very promising technology where AI-based solutions are ideal for selecting crops based on parameters like soil type, monsoon dates, availability and affordability. AgNext, a Mohali based company, is providing cutting-edge technological solutions for revolutionizing agri-food value chain. Lovely Professional University has filed several patents in the area of Internet of Things (IOT) to monitor the health of plants, pesticidal composition and image processing of crops.

The secondary agriculture (industry based on processing of cultivated products) entrepreneurial network in the region is led by The Punjab State Council & Technology, Centre for Innovative and Applied Bioprocessing, National Agri Food Biotechnology Institution and BIRAC’s BioNEST by Punjab University. Moreover, Punjab government has recently signed 18 Memorandums of Understanding with institutes like IIT Ropar, IMTECH, Chitkara University amongst others for the innovation in the agriculture sector foreseeing the caliber Punjab possesses.

Haryana, on the other hand, has also emerged out with some advanced technologies with active investment in the R&D cells of industry and universities have resulted in some exceptional technologies. Fare Labs Pvt Ltd., for example, has developed an automated system for the production of kachi ghani mustard oil. The other upcoming technologies cover ternary herbicide compositions, image processing for animal husbandry and tracking, synergistic compositions of pesticides and herbicidal combinations, novel pest and fungal control compositions, micro-climate forecasting and seed extraction devices.

To conclude, the ‘Smart Agricultural’ practices will help cut down the labor and upscale the production and research organizations, startups and companies in this area are working towards bringing this change. It would also help to optimize almost every possible aspect of farming covering right from the cultivation to the post-harvest processing, monitoring, and maintenance. The incorporation of automation, artificial intelligence, IoT and machines entails the high peak demands of the population and alleviates the lacunae of the fragility of the Indian agriculture.