In order to bring intellectual property protection at Canada more closely to the level of EU both Canada and European commission agreed on CETA (Comprehensive Economic and trade Agreement). CETA is a proposed free trade and copyright agreement between Canada and the European Union.

Canadian Prime Minister Stephen Harper and European Commission President Jose Manuel Barroso, in order to establish first free trade agreement between G8 country and European Union, politically agreed on key elements of CETA after long negotiations. According to the agreement, there will be removal of approximately 99% of tariffs between two economies and also covers most of the aspects of Canadian – European bilateral economic relationship that are investment, goods and services, and government procurement. 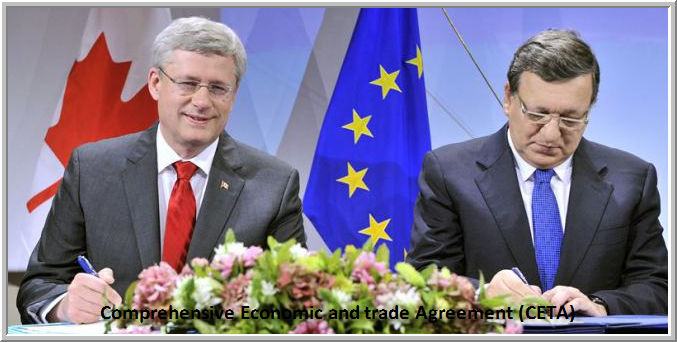 A briefing document ‘opening new markets in Europe’ was issued that highlighted the strong commitment of CETA towards IPR and rules to be enforced and would allow Canadians to access EU markets for developing and marketing the innovative and creative products that would be beneficiary for both innovators and investors along with consumers, but the complete details related to the agreement was not published. The Canadian government promised a simple, fair, equitable and cost-effective enforcement that would lead to a more predictable regime for intellectual property rights; this was specifically in concern to counterfeit goods and also signaled the political move towards the Act of Combating Counterfeit in March. Also the agreement would give recognition to EU Gls such as ‘‘di Parma and Prosciutto di San Daniele’’ as they would be authorized to use their name while selling their products in Canada and it also puts light on Canada’s Copyright Modernization Act.

In concern with the finalization of the agreement, still some actions would be required that includes legal reviewing of the agreement and rectification by the respective parliaments. The trade justice network and other organisations immediately asked Harper to publish the text drafted as the previously leaked version of the agreement that suggested that the deal would be bad for Canadians. Though many view point have already been made in this concern but the main test is still waiting for Harper’s political will.

There is a surprising newer type of race among the various organizations of...

Impact of IPR on the European Economy: Summary of OHIM’s Report

Brief summary of the report on “Intellectual property rights intensive industries:  contribution to...