U.S. District Judge Lucy H. Koh, California has agreed to US Magistrate Paul S. Grewal’s judgement that stated that Samsung would be required to produce the details about the extent to which it violated the Apple’s patent that would include e-mails that stated the communication made between employees and various witnesses would be made available to Apple for its violations.

Samsung appealed in District Court against Magistrate Paul S. Grewals’s decision and requested to bock the production of these details stating that this requirement was merely made to complicate the matter and had no other relevance. It also stated that this would cause to violate attorney- client protection. 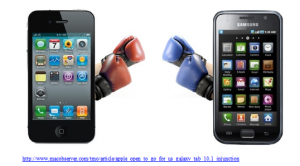 Judge Koh further stated in favour of Judge Grewal that since Samsung could not answer any question related to the use of improper disclosures satisfactorily, though three months time was given for investigation, Judge Grewal had to pass such a judgement.

Judge Koh’s order would be the part of patent dispute between smart phones technology in federal court, California. But the amount of damages that Samsung had to pay decreased to $639.4 million from $ 1.05 billion after finding that Suwon (South Korea based Samsung) infringed six iPhone patents related to mobile device.

Attending book signing events is popular amongst book lovers. Such events are generally...

Nowadays, design patents have been much talked about topic in almost all the...